4HEL is the most precise and easiest to use series of 4-roll plate bending machines with total pre-bending. Highly technological and innovative, 4HEL bending rolls assure high-productivity with a speed 3/4 times higher than a traditional pyramid bending roll. Moreover, thanks to their production methods, the 4HEL bending rolls can be effectively controlled through numerical control systems.

All models of Faccin’s 4HEL 4 roll plate bending machines are equipped with a rear side roll opposite the feeding side. Used as backing, this roll allows the plate to be rolled to be aligned in an immediate and accurate manner. The plate, moreover, always remains pinched between the two central rolls, thus avoiding accidental slips. This not only optimises pre-bending and rolling operations, but it also assures safer and more precise machining, with the option of being handled entirely by a single operator.

Thanks to the linear guide configuration of the 4HEL series bending rolls, the pre-bending operation does not require tilting the plate below the feeding level, as is the case with the traditional 3-roll bending rolls. In this way, therefore, horizontal feeding tables may be used, for easier feeding of the plate into the machine. Furthermore, there is no need to leave free space on both sides of the machines, but only at the selected infeed side.

4HEL 4 roll plate bending machines allow the plate to be rolled to the desired diameter immediately after the first pre-bending. This is followed by the second end forming, i.e. the second pre-bending. The processing method of 4HEL machines designed and built by Faccin allow the cylindrical ferrule to be made in one pass.

Electronic pyramid 4-roll plate bending machines make cone bending processing easier. The ability to tilt the side rolls and the central roll makes it possible to respectively set the cone angle and drag the sheet at its largest development. 4HEL series CNC bending rolls designed and built by Faccin are the best solution to bend plates of length between 1500 and 18000 mm with thickness 5 to 150 mm. 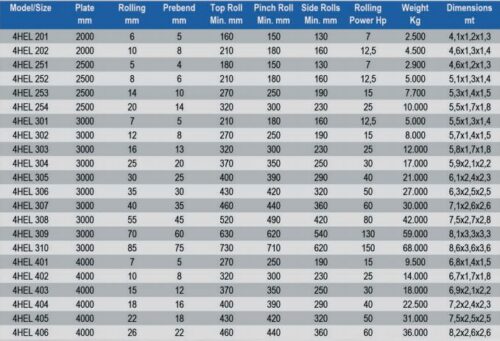